The Y-Rack is a "Y"-shaped launcher mounted on the Powered armor.

The Y-Rack was frequently mentioned in use during Raid on Skinnie Homeworld.

The Y-Rack is an optional equipment of the Soldier Suit. It can shoot a high explosive shell via the electrical magnetic catapult.

Because the launcher is shaped like "Y", the shell can be shot in three directions. In addition, the shell spins while been launched, so it can travel steadily without aiming.

In the early design sheet, the Y-Rack was originally going to be mounted on the back of the Powered Suit instead on the left shoulder. [1]

The M8 Ape is capable of firing grenades from the SW-422 Hellseed Y-Rack Grenade Launcher . 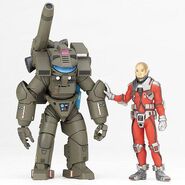 (on the left shoulder) 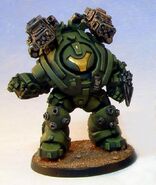