This page is about the Roughnecks in the film universe, for other versions, see Roughnecks.

The Roughneck Two-Zero, or simply Roughnecks, is a Mobile Infantry platoon that served in many battles against the Arachnids in the Bug Wars. The unit was originally lead by Lieutenant Jean Rasczak. After Lieutenant Rasczak's demise during Ambush at Whiskey Outpost, the unit is commanded by Johnny Rico, who later becomes a General.

"Everyone fights, no one quits. If you don't do your job, I'll shoot you. You get me?"
—Lieutenant Rasczak[src]

The Roughnecks is a platoon of Mobile Infantry that had performed better than most other units during the early stages of the war with the Arachnids. They fought at Zegema Beach where Sugar in the Roughnecks described it as "not being there anymore".

Johnny Rico, Dizzy Flores, Ace Levy were transferred to the Roughnecks after the defeat of Willy's Wildcat, their unit, during the Battle of Klendathu. Rico discovered that Jean Rasczak; Rico's former teacher on Buenos Aires was given command of the Roughnecks, with the rank of Lieutenant. Starship Troopers

Shortly after this transfer, the Roughnecks were deployed to Tango Urilla. After a bombing raid on a Bug horde, the Roughnecks went in and mopped up any remaining resistance. During this raid, a Tanker Bug bursted out of the ground behind the Roughnecks battleline, forcing them to flee. Corporal Birdie the second-in command, lost her arm to the Tanker Bug and Rasczak rescued her from it. Meanwhile, Rico managed to climb a hill that the Tanker was walking past and was able to jump on its back. Rico then used his Morita Assault Rifle to open a hole on its back, throwing a grenade into before falling off, successfully killing the Tanker. With the mission complete, Rico was promoted. Starship Troopers

The Roughnecks were then off duty and allowed to celebrate the victory. While off duty, the Federation forces receive a distress call from a outpost on Planet P, ordering the Roughnecks to investigate. The Roughnecks were dropped a distance away from the Whiskey Outpost, so they had to travel through several canyons, where a Hopper Bug were able to pick of stragglers. Whilst traveling through the canyons, Sergeant Gillespie was unable to get a radio signal and moved to higher ground in an attempt to restore it. This turned out to be a fatal mistake as a Hopper Bug flew at him, capturing the Sergeant and dragging him to a high ledge where it proceeded to tortured him until Lieutenant Rasczak shot his Sergeant dead using Sugar Watkins' scoped Morita Assault Rifle then stating "I'd expect everyone to do the same for me" and returns the rifle back to Watkins and chose Rico to become acting Sergeant.

The Roughnecks then proceeded on their mission reaching Whiskey Outpost where they found the base covered in corpses and with a Bug hole in its mess hall. When a sudden banging sound appeared from a locker, they surrounded it whilst Rico opened the locker, releasing General Owen. The general congratulated the Roughnecks on rescuing him until he discovered that they were not on a rescue mission with dropships.

It was at that point that of the Trooper Sugar screams "BUGS!" and the Roughnecks soon discovered hundreds if not thousands of Warrior Bugs charging towards the outpost. They ran to the outposts walls, trying to defend the base as best as they could whilst Dizzy got on the radio and tried to get a rescue ship. This attempt took some time before she could get a signal and Rico came in from the defense, ordering a rescue boat. After Rico informs Lieutenant Rasczak that a rescue boat was coming, Rasczak ordered the Roughnecks to withdraw into the compound whilst Warriors breached the walls. Suddenly, the ground below Rasczak caved in, pulling him in and ripping his legs off. Rasczak ordered Rico to kill him, to which Rico complied.

The boat landed and Zander Barcalow exited, telling the Roughnecks to get aboard while he provided some supporting fire. Then from the ground beneath where Rasczak died, a Tanker Bug bursted out of the ground and inhaled a gulp of air before shooting its molten liquid. When it was preparing, Dizzy took the chance and threw a grenade into its mouth, blowing its head off. Full of joy, Dizzy turns to the rest of the Roughnecks and is celebrating when a Warrior Bug runs up behind her, stabbing her four times. The warrior is killed and Johnny and Ace pulled her into the dropship. Zander yelled at the two troopers on the tower to come on, but while running towards the dropship, another Tanker Bug incinerates them. Dizzy then died on the dropship. Rico then assumed command as the most senior officer of the Roughnecks and ordered Fleet to bombard the planet's surface; his request was refused, which lead him to furiously state "M.I. does the dying, Fleet just does the flying.

Onboard the Rodger Young, the Roughnecks had a funeral for Dizzy, after which Carl Jenkins entered and promoted Johnny to Lieutenant, ordering the Roughnecks to return to Planet P. Starship Troopers

The Roughnecks, along with a large task force went back to Planet P in order to try capturing the Brain Bug. Upon their arrival on the planet, the Roughnecks received a new batch of soldiers to replace their losses at the Ambush at Whiskey Outpost, most of which were straight out of boot camp. The Roughnecks proceeded on-mission, however, in the caverns, Rico and two men take a detour and manage to rescue Carmen Ibanez, who was captured by the Bugs after the destruction of Rodger Young. Unexpectedly, they located the target Brain Bug, which would flee only to be captured by Private Zim. Starship Troopers

Nearly 10 years after the battle on Planet P, the K-12 Team of Roughnecks stationed at Fort Casey were ordered by Carl Jenkins to capture the Queen. Major Henry Varro, the commander of K-12, disobeyed the order as it was almost a suicide mission that could wipe the whole team. He was then charged with insubordination and arrested by Carl Jenkins. Starship Troopers: Invasion "Mobile Infantry"

The A-01 team of the Roughnecks[1] on Alesia received the order to rescue the survivors of the Roughnecks K-12 team,[1] including Otis Hacks, "Ratzass", Holy Man and Kharon. The mission was accomplished and the Fort Casey was destroyed. Starship Troopers: Invasion

Later, while the A-01 and K-12 were going back to Terra, General Rico gave them a new order: finding the lost John A. Warden, which was taken by Carl Jenkins from its captain, Carmen Ibanez. Major Varro was released to take the lead under K-12 Team members' request.

Upon reaching and boarding the John A. Warden, they found all personnel of the ship were killed, except for Carl Jenkins After they reactivated the generator, the mission turned into a disaster, since the Queen Bug had controlled the whole ship, destroying the Alesia before setting out to Earth.

After the John A. Warden reached the orbital of Earth, the Queen destroyed three Starships trying to intercept it and entering the Earth's atmosphere. General Rico lead the Marauder Team to rescue the survivors on John A. Warden before L-6 Satellite Base was to deploy several nuclear warheads onto the crash site. The nuclear warheads eventually were launched against the John A. Warden whilst the Roughnecks were still onboard. However, they were destroyed by the John A. Warden's turrets. To prevent an Arachnid outbreak, the Roughnecks placed C-4 explosive on the ships engines then just barely escaped using Jenkin's shuttle that was still docked to the ship.

In the end of the engagement, though the Queen Bug was killed, the A-01 and K-12 were nearly wiped out, only three Roughnecks members survived. The Marauder Team also had five Cap troopers killed in action. Starship Troopers: Invasion 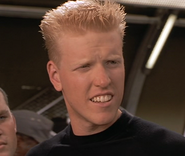 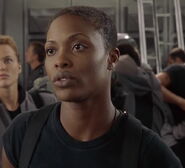 Sergeant Gillespie †
Add a photo to this gallery 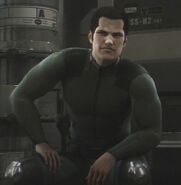 "Shock Jock" †
(medic)
Add a photo to this gallery 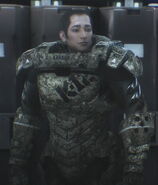 "Kharon" †
Add a photo to this gallery

Retrieved from "https://starshiptroopers.fandom.com/wiki/Roughnecks_(film)?oldid=34228"
Community content is available under CC-BY-SA unless otherwise noted.