Pluto, the fraudelent "9th planet" in the Sol system, was used for scientific research by SICON scientists. Arachnids appear on this planet, which prompts SICON to order the military to go and wipe them out, believing them to be a previously unknown species native to Pluto.

Not long after military forces from Earth think they've defeated an alien Bug infestation on Pluto, the insects return and threaten our scientific outposts. Mobile Infantry forces are sent back to Pluto for what is believed to be a little mop-up mission. Rookie Troopers Johnny Rico, Dizzy Flores and Carl Jenkins make their first military drop with "Razak's Roughnecks," an M.I. squad let by Lt. Razak, a legendary soldier known for his heroism. Shortly after they arrive, the Roughnecks discover that this is not just a simple "hit and run" mission ... but the first battle of what's to become the First Interstellar War.

Carmen and Zander are trapped in a scientific research outpost on Pluto when their Retrieval ship is shot down by Plasma Bugs. Razak's Roughnecks pick up a distress call from Carmen, and set out to locate the Plasma Bug Cave and destroy the insects. Rico is driven by the need to be Carmen's rescuer, risking his own life and the safety of his squad ... but when the mission is over, Carmen is unaware that Rico is ultimately responsible for her rescue.

SICON decides to send the Roughnecks on a special mission: bring back a live Plasma Bug from behind enemy lines. Along with an uptight Ivy-league Intelligence officer named Lieutenant Earle Walker, the Roughnecks must transport the bug through rough terrain; meanwhile, plasma reserves have reached critical mass inside the bug, and any impact could cause it to explode. Lt. Razak is forced to take orders from the ego-driven Lt. Walker, who is willing to risk lives for the sake of this bug. This causes Rico to question whether Razak has lost his nerve or his pride. In the end, despite Walker's threats, Razak decides to help a losing M.I. unit by performing an airstrike with the awakening bug. And Rico learns a valuable lesson about putting duty over ego.

When Higgins' actions - but mostly the lack of them - during battle compromise the safety of the Roughnecks, Lt. Razak wants to have him shipped back to Earth. But after Rico stands up for him, Lt. Razak comes up with another plan - Rico will train Higgins and turn him into an efficient solider. Easier said than done, however. Meanwhile, the Roughnecks must rescue a Demolition Squad trapped in a canyon by a Warrior Bug ambush. But when they arrive, the Roughnecks suddenly come under attack by a bug no one's seen before -- the flying "hopper", armed with a razor-sharp stinger. Laser weapons don't seem to work on these bugs, and eventually the Roughnecks discover the Hoppers actually absorb the laser energy, growing stronger. So, they set a lure, and blow a whole swarm up. Even Higgins scores a lucky kill.

The Roughnecks are one of several squads sent beneath the surface of the planet to locate the source of the bug army, dubbed "Bug City," and call in an airstrike. The Roughnecks travel deep into bug tunnels, and Dizzy winds up suffering from extreme claustrophobia - a fact she decided to hide when enlisting - which puts the entire squad at risk during numerous bug attacks. Eventually, Carl places a hypnotic suggestion in Dizzy's subconscious, curing her of her phobia. The Roughnecks finally emerge back on the surface of Pluto, inside a massive asteroid crater filled with bug eggs that have already hatched. Then, the Roughnecks witness the arrival of a Transport Bug, pretty much a starship Bug, which lays more eggs and drops off hundreds of adult Bugs - leading to the revelation that the Bugs are not native to Pluto, and the SICON. forces are no longer facing a simple infestation by indigenous species, but a full-fledged interstellar war. 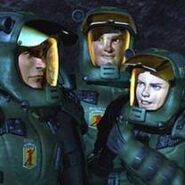 During this campaign Warrior bugs, Cliffmites, Tanker Bugs, Hoppers, Plasma Bugs , and the Transport Bug are encountered by the Roughnecks for the first time.