A Plasma Bug is a breed of the Arachnid species that able to discharge plasma at enemies.

With each bug specially engineered for a specific role in combat, Plasma Bugs serve as planetary defense, anti-aircraft and artillery units. They have an enormous abdomen which swells up and can launch a plasma burst into orbit. The burst is powerful enough to deflect an asteroid or slice a capital ship in two. It is believed that they serve as launching units for spore capsules.

The Plasma Bugs serve as the Bug artillery and are bigger than the Tanker Bugs, and have the ability to fire huge, volatile globs of plasma from their rear of their abdomens at airborne or distant targets. One of the Roughnecks' missions was to capture a baby Plasma Bug alive so SICON researchers could discover how this plasma is generated. It is said this bug is used to launch spores into space, yet such functionay obsolete compared to Transport Bug's function as bio-cruisers for Arachnids army. Plasma Bugs have surprisingly good accuracy in targeting ships in orbit despite being based on a planet's surface. Naturally, these bugs are primarily used for planetary defense though they also function as defensive guns for hives and artillery against land based targets. During the Homefront Campaign, they were used as ship batteries for the Transport Bugs for ship-to-ship space combat.

This leads to question: how these massive bug batteries are able to target or even see their enemies' position, but many theorize that other bugs act as their eyes. This has still been unproven, though. 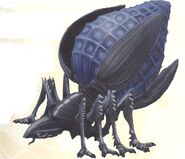 Retrieved from "https://starshiptroopers.fandom.com/wiki/Plasma_Bug?oldid=35228"
Community content is available under CC-BY-SA unless otherwise noted.