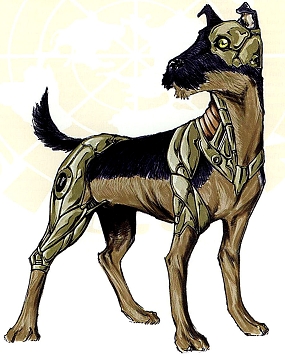 In common with much of the other equipment used by the Pathfinders, the Neodogs of these Platoons are fitted with experimental modules, and are genetically enhanced through specialized breeding programs to be stronger, quicker, and tougher – vital for the missions they face alongside their Pathfinder masters. Pathfinder neodogs were the forerunners of the Mk II Neodog, now available throughout the Mobile Infantry, and were the first to use potentially any breed of dog as the basis of genetic reconstruction, rather than the Alsatian/wolf hybrids of the first calebs. Each Pathfinder Neodog carries a powerful explosive charge, ensuring that it has a good chance of a final strike against any enemies and also that it does not suffer greatly if mortally wounded.

Core Bomb: This is less a special feature than a control device to ensure neodogs never fall into enemy hands. They also take care of any problems that might occur if a neodog’s conditioning breaks and it becomes a threat to others. Core bombs can be activated either by the neodog itself in case of capture or the handler if there is no other recourse. Core bombs are explosive weapons and should be treated as such. If detonated, it instantly kills the creature carrying it.

Damage Reduction: A neodog ignores some damage from all physical attacks. Wounds either heal immediately or the attack bounces off harmlessly (in either case, the opponent knows the attack was ineffective). The creature takes normal damage from energy and psychic attacks.

Darkvision: A neodog can see in the dark up to 90 feet. Darkvision is black and white only, but it is otherwise like normal sight and the creature can function just fine with no light at all.

Intuition: Calebs have the ability to simply ‘feel’ their surroundings and get a sense of danger – it can use to its handler’s benefit as well as its own through the bond they share.

Low-Light Vision: A neodog can see twice as far as a human in starlight, moonlight, torchlight and similar conditions of shadowy illumination. It retains the ability to distinguish color and detail under these conditions.

Scent: This special quality allows the neodog to detect approaching enemies, sniff out hidden foes and track by sense of smell. The neodog can identify familiar odors just as humans do familiar sights.

When a neodog detects a scent, the exact location of the source is not revealed – only its presence somewhere within range. The neodog can take a move action to note the direction of the scent. Whenever the neodog comes within ten feet of the source, it instantly pinpoints the source’s location.

Fight as One: Neodogs have the capacity to fight with cybernetically enhanced teeth. They are most effective when fighting the same target as their handlers, as they are trained from birth to flank and take advantage of openings that their handlers provide during combat.

Mind, Body and Soul: Neodog handlers and their animals develop so closely together over time that after mastering the basic commands and operations in tandem combat, they act the same, talk the same and tend to focus on exactly the same tasks in exactly the same way. While many in the Mobile Infantry find this disconcerting, there is no denying the benefits such a deep fusion between man and animal can provide.

Retrieved from "https://starshiptroopers.fandom.com/wiki/Pathfinder_Neodog?oldid=6889"
Community content is available under CC-BY-SA unless otherwise noted.