The name or term "Mobile Infantry" refers to more than one character or idea. For a list of other meanings, see Mobile Infantry (disambiguation).

The Mobile Infantry is the ground military component of the Federal Armed Services of the United Citizen Federation. The primary military arm of the Federation Army, it is comprised of volunteers from all administrative regions of Earth and other Federal worlds joined into homogeneous units with no particular attachment to any specific region, eliminating the nationalistic tendencies caused by sovereign territories that provoked the Disorders and instilling personal sense of duty in the future Citizen franchise.

The Platoon is the basic tactical maneuver brick of the Mobile Infantry. A Platoon consists of 36 personnel, commanded by a Lieutenant. A Viking Dropship can transport an entire Mobile Infantry platoon.

Each Platoon is divided into four Squads of eight troopers each. A command element of four people is in addition to the squads. The command element consists of the Platoon Commander (LT), the Platoon Sergeant (SGT), a Sniper (PVT), and a Communications Operator (CPL).

There are four companies per battalion, commanded by a Lieutenant Colonel.

Four battalions makes a regiment, commanded by a Colonel.

The battle gear of the Mobile Infantry differs only slightly from modern day SWAT armor and Army BDUs (the uniforms greatly resemble Wehrmacht battle-gear from WWII). They are equipped with a helmet, thin body armor which is more for personal equipment carrying purposes, gloves and synthetic rubber combat boots. In hot environments, long sleeve field jacket are discarded in favor of the black T-shirt which is normally worn as an undergarment.

Communication operators carry a large backpack, possibly featuring radio and battlefield awareness system. The equipment not only allows surface to surface voice communications, but also surface to orbital, as well as real-time data updates, which keeps the operator well aware of the current battlefield events within 10 km radius. This is similar to the Blue Force Tracking systems developed in the early 21st century.

Eventually, the Mobile Infantry gear transited into Power Suit, a powered exoskeletons, allowing soldiers to operate in Zero-G, jump tall heights, a built-in jetpack allowing soldiers to fly for a short period of time, enhanced ballistic protection in cases of friendly fire and a fully enclosed helmet with a battlefield awareness system, HUD, and life support. Hardpoints for weapons like a minigun for battlefield crowd control or munition launchers and mini missile launchers that can take out entire hordes of Bugs in a single salvo, advancements which gives entire platoons the firepower of an army.

with the introduction of the powered exoskeletons, weapons introduced includes the Morita Mark 1 Assault Rifle and Morita Mark 3 SAW which are way stronger then the previous weapons, able to kill a bug with just a small burst without the need of aiming for the eyes where's previous models takes several bursts and the Morita XXX Sniper Rifle which is able to kill bugs with a single hit, sidearms includes the Vector CT1 for Naval staff and certain mobile Infantry units. The new weapons coupled with the Hardpoint weapons allow entire squads to clear hordes of bugs in minutes, something which would have been suicidal for mobile Infantry troops without power suit

During the Klendathu Invasion, the Mobile Infantry employs questionable tactics - if you would even call it that - when storming the Arachnid home-world. Pouring out of their dropships, the troopers formed loose mobs, barely establishing any defensive lines or even flanks. This leads to an easy breakdown of communication and contributed to the extreme losses the Federation suffered in combat. While confronting the Arachnids, several troopers simply "sprayed and prayed", firing their Morita rifles with reckless abandon without inflicting damage on the Arachnids. The Federation treats its soldiers as expendable storm-troopers, seeing that on FedNet they are shown dying. However, this could be propaganda to get people to think they are making a heroic sacrifice.

If an unfortunate situation arises where death to a Bug is inevitable, they are also instructed and/or encouraged to kill a fellow soldier to spare them the horrific death awaiting them.

By the Second Bug War Mobile Infantry tactics were greatly improved. On Roku San, they used "file and rank" tactics; one line of troopers would fire while the line behind them would reload. However, this was only supported because they were fighting in the narrow corridors of the Roku San garrison base, forcing the Arachnids into a single file row that they were able to pick off easily. 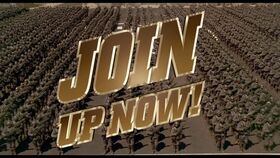 Federal Service, including military, is purely voluntary; Recruits go through extensive drills designed to push them to the limit. These include capture-the-flag competitions using Training beam rifles and eventually training with live ammunition. In the event a trooper feels they can't handle it, they can sign Form 12-40-A and quit, with the only penalty being that they may not re-enlist.

Retrieved from "https://starshiptroopers.fandom.com/wiki/Mobile_Infantry_(film)?oldid=35193"
Community content is available under CC-BY-SA unless otherwise noted.