Back to page
Edit

The M11 Babar is a motorized exoskeleton known as "Marauder". It is a Power Armor type armed bipedal vehicle, created by the United Citizen Federation for the soldiers of the Mobile Infantry in the Arachnid war. This weapon is the first combat suit of the infantry.

Marauders are first saw operation during the Battle of OM-1 where they were deployed on a rescue mission to save Captain Lola Beck. The mission was proven a success and Rico was promoted to General and put in command of the Marauder program.

Making an appearance for the first time during the Second Bug War, the Marauder Mechs are most efficiently described as human exoskeletons (namely due to the fact of them requiring and interacting with the human nervous system). They were giants on the battlefield and although no factual stats as to height can be claimed, it is effective to say the mechs alter to each user, for instance the Marines under Rico's command seem to differ in height yet all the Marauder Mechs seem to balance out this by altering their own height, thus not effecting its user. But before use, the Marines had to under go neurological scans — without clothing — for proper use.

The Marauder Mechs came complete with a HUD of some sort; this can be seen as an effective scanner that efficiently searches the area for all living matter. Rico uses this during his rescue mission to find the survivors. The scanner not only actively scans for biological organisms, but also tells the user vital information (this is common with most mech HUDs. However, this may be considered strange since the Marauder mechs are connected to the users' nervous system).

Although their internal components are unknown, it is easy to see that technology of Federation time and research has gone into the Marauder mechs themselves. The metal that comprises the outer armor is impenetrable to all Warrior Bugs' attacks, not even a dent nor tear is seen on any of the seven suits. The metal may be in testing stages or of greater thickness. This can be argued that during the Battle of Roku San an Electric Pillars consisting of a layer of thick metal is simply torn apart by one bug. However, the suits seem to be no thicker on their joints than the one sheet of metal seen on the Electric Pillars. The theory could be that the Federation is testing a new substance or that simply this metal exists and is used by the mechs due to them being able to supply enough power and momentum to make it efficient armor.

Each Marauder is equipped with two weapons on their arms. These weapons appear to be customizable with Marauder teams using a mix of them on mission.

This is an 1/35 scale action figure of Sergeant Sunday's M11 Babar but with the number "04", Johnny Rico's number. The figure has die-cast parts, making it with weights.
The figure is also sold with the Japanese version of the Starship Troopers 3: Marauder DVD with only 7000 sets. 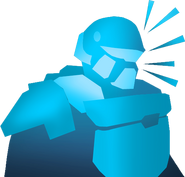