Henry Varro, nicknamed "Hero", was an American Mobile Infantry major of the United Citizen Federation, commander of the K-12 Team, a Roughnecks team stationed at Fort Casey. Hero was one of the most decorated officers of the entire Federation.

Before K-12 team was retrieved by A-10 team, Varro had been charged with insubordination and arrested by Carl Jenkins. He was being transported as a prisoner on the FAS Alesia to Earth for court marshal. It is later revealed he was arrested because he disobeyed an order, refusing to lead his team to capture the Queen Bug.

Before setting out to search for the missing John A. Warden, Ratzass asked General Rico to let Hero lead the team. Rico stated he granted the permission as long as Hero was willing to do so. However, this action would not do any influence on Hero's trial. He was later convinced by Tony Daugherty and Carmen Ibanez, deciding to lead the team.

Major Varro lead the Team-02, which consist of the surviving members of the K-12: Bugspray, Ratzass, Holy Man, and Kharon, and several troopers from the A-01, including Chase and Gunfodder.

After aboard the John A. Warden, Varro lead his team to investigate the engine room. They then found horrified Jenkins, who locked himself in a Bug cage and warned them not to restart the engine — which was too late. Later, the troopers was under heavy attacked by overwhelming Warrior Bugs. They then found out it had been taken over by the Queen Bug after it destroyed the Alesia and prepared the John A. Warden heading to Earth. Before the warp, Major Varro told Captain Ibanez what happened in the Fort Casey.

A while after John A. Warden crash-landed on Earth, Major Varro lead the remaining troopers: Ice Blonde, Mech, Bugspray, Ratzass and Holy Man, to killed the Queen. They then reunited with Captain Ibanez, who was psychically guided by Carl Jenkins. Major Varro assigned Ice Blonde to keep Captain Ibanez safe before he told Mech and Ratzass go to the engine room to set C-4 charges. Later, he and After going separate with the troopers, when Major Varro was heading to the chamber where the Queen was, he was faced by a bunch of Warrior Bugs. Suddenly, several Warrior Bugs appeared from his behind and attacked the Warrior Bugs coming toward him. Those Bugs were controlled by Carl Jenkins. Jenkins revealed that those Bugs were "Federal Intelligence Bugs", his secret research on John A. Warden.

Jenkins and Varro then went to Queen's chamber along with the remaining Federal Intelligence Bugs. However, the Queen Bug used Daugherty's body in an attempt to negotiate for Jenkins' life and letting Hero live. Hero told the Queen to "fuck off" and a battle ensued between the FIBs and regular Bugs. The battle was rather brief as the FIBs were able to easily fight off the Warriors, but the Plasma Grenadiers gained the upper hand and blasted several FIBs to pieces. Within seconds, every FIB was killed while only Hero and Jenkins were left. Jenkins said if he could finish the research, he would be able to use more Federal Intelligence Bugs. Varro told Jenkins to escape, so the project could be finished. Later, Major Varro was mortally wounded and he detonated a grenade, killing himself along with the Warrior Bugs around him. General Rico referred to him as a true hero. Starship Troopers: Invasion

This is a Play Arts Kai action figure of Henry Varro in Power Suit. 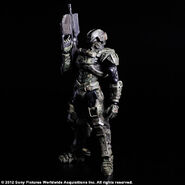 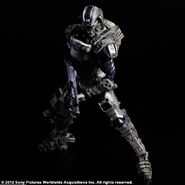 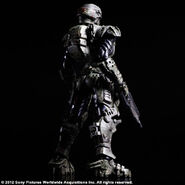 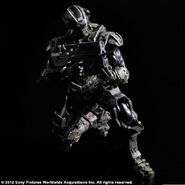 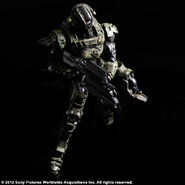 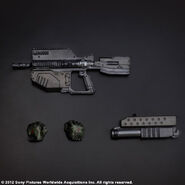 Retrieved from "https://starshiptroopers.fandom.com/wiki/Henry_Varro?oldid=34673"
Community content is available under CC-BY-SA unless otherwise noted.