On Fort Casey, Ratzass was among the K-12 team that captured the Queen Bug. He, along with the survivors of the team, including Bugspray, Kharon, and Holy Man, were rescued by the A-01 team lead by Lieutenant Daugherty. The survivors later boarded the FAS Alesia.

After boarding Alesia, Chase asked Ratzass what happened in Fort Casey. Ratzass told him that Carl Jenkins assigned them to a death run. However, this thing seemed to be sensitive an classified.

When he and Bugspray were chatting and walked into the locker, they met Ice Blonde, corporal from the A-01, who was going to take a shower. Ratzass tried to flirt her. Out of his surprise, she walked toward Ratzass, showing her full-frontal and passing him. This made Ratzass have no idea what to response. Bugspray laughed him upon seen this.

Later, he saw Chow, an A-01 trooper, was practicing martial arts. Ratzass look down on Chow, mocking him that it was "dancing" and the place was not for the activity. Chow said this was the place for "dancing" and asked Ratzass for "a dance". Ratzass accepted, claiming he don't usually dance with guys, but he would make an exception for Chow. Ice Blonde, who just took a shower, came and volunteered to be the referee, ringing the bell.

Chow was faster than Ratzass and almost beat him with ease. After Ratzass took a fist in his head and started to disorient, Ice Blonde exposed her right breast. Being some sort of encouraged, Ratzass managed to strike back, hitting Chow out of his surprise. The punch was hard enough to knock Chow down. In the end, the game was a draw as Ratzass eventually fell down as well and everyone laughed.

Upon being called for an emergent briefing from General Rico, he ran to the conference room with Chow and Ice Blonde. Chow asked where he learned the move that knocked him down, Ratzass replied "Dance class" with smile. During the briefing, they learned the John A. Warden was missing and General Rico ordered them to find the ship since Alesia was the nearest ship available. Ignoring Buspray's warning, Ratzass stood up and claimed to speak for the everyone from the Fort Casey when General Rico asked if there was any question. He requested that they only went with one condition: Hero lead the team. Rico stated he granted the permission as long as Hero was willing to do so. However, this action would not do any influence on Hero's trial.

Before setting out for the mission, when he was cursing Carl Jenkins again, Bugspray told him not to because people like Jenkins were so powerful that they could do anything to the troopers. A minute laterm, he and the rest of the K-12 Survivors had seen Trig walking by and noticed that she and Bugspray were already having an intercourse and said "Oh...oh man Fuck You!" then he walked away complaining "I can't believe I am the only one not getting laid around here.". Later, Ratzass saw Ice Blonde holding with a photo of she and her daughter. Ice Blonde told him about her daughter and the deceased husband. She was eager to return to Earth to reunite with her daughter. Ratzass started to boast himself, but Ice Blonde walked away.

A while after the John A. Warden was found, the troopers found out it had been taken over by the Queen Bug. The Bugs destroyed the Alesia and prepared heading to Earth.

After the ship crash landed on Earth, Ratzass was one of the few surviving troopers, including Major Varro, Mech, Bugspray, adn Ice Blonde. The men went to killed the Queen while Ice Blonde stayed for Captain Ibanez's safe. Before leaving, Ratzass told Ice Blonde that she could soon went home to saw her daughter because he was going to kill the Bugs' mother.

Ratzass and Mech then went to the engine room to set the C-4 charges under Major Varro's order. They then headed back to the airlock to reunite with Ice Blonde, Captain Ibanez, General Rico, and Carl Jenkins.

They then went to Jenkins shuttle for escape. After General Rico boarded the shuttle, they successfully escaped from the John A. Warden before the ship's explosion, killing the Queen along with the Bugs.

Later, Ice Blonde, Ratzass, and Mech watched the wreckage of John A. Warden and saluted to the deceased troopers. Starship Troopers: Invasion

After the John A. Warden Incident, Ratzass was promoted into Sergeant Major and reassigned to Nemesis along with Johnny Rico, now demoted as a colonel and assigned as an instructor. After Nemesis was attacked by Bug Plasma, Ratzass. Rico, and Lost Patrol escaped with a Landing Ship. Before the vessel was destroyed, he jumped out for HALO diving along with other. However, his helmet failed to air sealed causing him to freeze to death. Starship Troopers: Traitor of Mars

This is a figure of Ratzass in his Power Suit, holding his Gatling gun, only sold within the Starship Troopers: Invasion Blu-ray DVD limited version with only 1500 sets.
The decal needed to be applied by the collectors themselves. 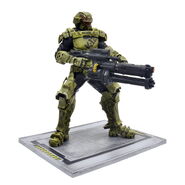 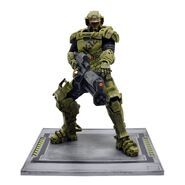 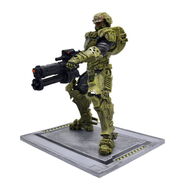 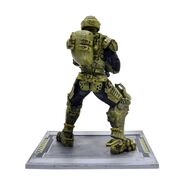 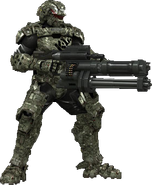 Character model of Ratzass
Add a photo to this gallery

Retrieved from "https://starshiptroopers.fandom.com/wiki/Guy_Cunningham?oldid=34735"
Community content is available under CC-BY-SA unless otherwise noted.