The name or term "Dizzy Flores" refers to more than one character or idea. For a list of other meanings, see Dizzy Flores (disambiguation).

Film universe
Private "Dizzy" Flores was one of Johnny Rico's high school classmates. She was infatuated with him and was the quarterback for the Buenos Aires JumpBall team. Although she planned to play for Rio de Janeiro after graduating, Flores secretly joined the Mobile Infantry and successfully gained a transfer to Rico's training unit.

Flores was killed in the Bug ambush on Whiskey Outpost after killing a tanker bug that mortally wounded Lt. Rasczak.

Dizzy is a classmate of Johnny Rico's in high school, and his teammate on the school's jump ball team. It is heavily implied she is in love with Rico, whilst disliking Carmen for being with him.

At a school graduation dance, Dizzy waits until Carmen walks away from Johnny to get a dance with him. During this, Johnny asks her if she is going to play for a team in Rio after graduation. Dizzy affirms that, unless a team in Tokyo lets her start. Johnny tells Dizzy that any team that signs her will be lucky to have her. Dizzy then asks Johnny why they never got together to which Johnny asks "can't we just be friends, Dizz?".

Dizzy joins the Mobile Infantry and is initially assigned to Fort Cronkite, but successfully transfers to Rico's training unit, which annoys Johnny as he believes she only joined to follow him. However, later during training, Dizzy helps Johnny become squad leader and the two make peace, with him showing appreciation for her help. After the death of a squadmate, who was accidentally killed during live-fire training under Rico's command, Dizzy is visibly worried watching him along with the others including Ace Levy receive ten lashes by Corporal Bronski as punishment.

When war breaks out following the destruction of Buenos Aires, Dizzy is deployed to Klendathu during the disastrous campaign that kills the vast majority of her unit.

She is then transferred to the Roughnecks, along with Rico and Ace Levy, deploying to Tango Urilla, where she becomes a squad leader. Following a successful mission on the planet, during a victory celebration, she consummates her love with Johnny.

The Roughnecks are then deployed on a recon mission to Whiskey Outpost on Planet-P, she repairs the base's damaged radio allowing the ambushed Roughnecks to request retrieval.

During the rescue by Dropship from the outpost, Dizzy is able to kill a Tanker Bug by throwing a grenade into its mouth whilst it was inhaling. After killing it, she turns to the squad in delight when Rico suddenly screams at her to watch out - a Warrior Bug had somehow made it to the centre of the outpost stabbing her four times in the torso. Rico, Ace Levy, Sugar Watkins, an unnamed M.I trooper, and possibly Zander rescue her and get her to the dropship, but she dies on the way back up to the Fleet.

Rico, enraged by the loss, demands the fleet "glass that rock" but his request is denied by Captain Deladier. Rico remarks in response: "The M.I does the dying, the fleet just does the flying."

A funeral was held for Flores after the surviving Roughnecks return from Planet-P, with Rico giving the eulogy. He stated that Dizzy was his friend, a soldier, and more importantly, a citizen of the Federation . Her casket containing her body was then jettisoned into the vacuum of space, as part of her burial. Starship Troopers

As Johnny Rico's mentality was difficult to crack, Carl Jenkins used Dizzy as his avatar to communicate with Johnny in order to pass the message to him as well as helping Rico to survive. Starship Troopers: Traitor of Mars

Dizzy was headstrong, tough, and confident, a capable soldier and leader under pressure as shown by her unorthodox tactics in training. Her romantic feelings for Johnny were her primary motivation for joining the Mobile Infantry.

Johnny Rico is Dizzy's brief lover. Dizzy has had a crush on Johnny since high school, despite the fact that he had a girlfriend at the time. On the last night of their high school prom, she and Johnny shared a dance together, even though he told her that he was saving a dance for Carmen, despite this, they had a friendly conversation. He was obviously aware of her romantic feelings for him but did not reciprocate. When Dizzy joined the Mobile Infantry, and Johnny's unit he was visibly annoyed believing she was following him, rejecting her friendly advances. Johnny later softened to her, following their mutual success in training and later combat service together. Coupled with Carmen's desire to go career in the Fleet, effectively ending her relationship with Johnny, Dizzy and Johnny grew closer later pursuing a romantic relationship before her death on Planet-P.

Dizzy held obvious jealousy for Carmen, Rico's girlfriend through high-school. In high school, she made some coy remarks against Carmen, especially when she was unable to handle the autopsy of a Arkellian Sand Beetle in class. She was cordial and respectful of Carmen when they met at Ticonderoga battle station prior to the Battle of Klendathu.

Carl Jenkins is Dizzy's friend. They would share several dances together at the prom.

Dizzy's reaction at Rico being given ten lashes by Bronski as punishment. 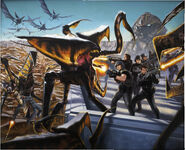 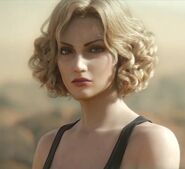 "Someone asked me once if I knew the difference between a civilian and a citizen. I know now. A citizen has the courage to make the safety of the human race their personal responsibility. Dizzy was my friend. She was a soldier. But more than that, she was a citizen of the Federation."
— Johnny Rico regarding on Dizzy on her funeral. Starship Troopers