The name or term "Carl" refers to more than one character or idea. For a list of other meanings, see Carl (disambiguation).

General (Dr.) Carl Jenkins is a psychic, a general, a scientist and minister of the Ministry of Paranormal Warfare of Military Intelligence. Celebrity, sinister and popular man of the United Citizen Federation. He is a good friend of Carmen Ibanez, Dizzy Flores, and Johnny Rico since high school.

Carl is a student at a high school in Buenos Aires. He is a lifelong friend to Johnny Rico, Carmen Ibanez, and Dizzy Flores. He is in most of the same classes as his friends. He also is participating after school in a Federal Study on psychic abilities, that he tries to do on both Johnny Rico and his pet ferret Cyrano

When Carl graduates from high school in Buenos Aires; Carmen and Carl both plan to enlist in the military service to become "Citizens". Carl goes through various tests to determine his role in the Federation military. He achieves a high grade that qualifies him to join Military Intelligence, largely due to his psychic abilities, to a division called GAMES & THEORY. He would ship out the next morning to a top secret destination to begin his training.

He would appear in a FedNet Video, where he is now identified as a military scientist, and performs a demonstration on the combat effectiveness of a typical Arachnid Warrior, and identifies the need to target the nerve stem of an Arachnid in order to put it down for good.

After the ambush on Planet P in which the Roughnecks receive large casualties Carl joins Johnny and Carmen after Dizzy's funeral; now a member of the Military Intelligence division, and quickly promoted to Colonel, Carl then admits that the Roughnecks were used as bait to test out a theory, which Johnny was suspicious of, but that theory has proven correct, that there exists a single "Brain Bug" that controls much of the Arachnids' behavior. Carl promotes Johnny to Lieutenant, and assigns the Roughnecks to search for this Bug on their next assignment.

After the Brain Bug is captured on Planet P Carl and several senior officers of the Military Intelligence approach the Brain Bug and Carl tries to gain a psychic connection to it in which he is able to determine that the Brain Bug is scared, he then meets up with Johnny and Carmen who believe that he used his psychic abilities to convince Johnny to go rescue Carmen. Starship Troopers

Fifteen Years after the capture of the Brain Bug, Carl is now the Minister of Paranormal Warfare, and is one of the most prominent figures in the Terran Federation. He has also gained even more power with his psychic abilities, and is now very distant from his friends Johnny and Carmen.

During the attack on the asteroid base Fort Casey Carl orders to take Carmen's ship the John A. Warden on a deep space experiment into the Nebula. She immediately suspects something wrong and suspicious but he brushes her off and proceeds with his mission. It is also revealed that Carl arrested Major Henry "Hero" Varro for insubordination, he soon evacuates Fort Casey and takes off into the Nebula leaving the remaining troopers stranded and forced to evacuate on the ship Alesia.

Soon after, the L-6 base and General Johnny Rico have lost communications with Carl and ship, he orders the K-12 and A-01 team of troopers to rescue all survivors. After the troopers locate the John A. Warden, Hero discovers the frightened and hysterical Carl, who has locked himself into a Bug Holding Cell. Carl reveals that all the crew members are dead and bugs have taken over the ship. Carl decides to stay in the holding cell as the bugs attack. It is also revealed by Hero that Carl captured a Queen Bug on Fort Casey and attempted to psychically hack her, but instead she hacked him and discovered all the Federation's plans. The Queen Bug also managed to take control of the ship and crashed it onto Earth.

Later, when Carmen was being pursued by a bug she heard a voice helping her find the other troopers, which was revealed to be Carl, who had regained his sanity. After a while, just as Hero was about to be killed by several Warrior Bugs, Carl arrived along with several Federal Intelligence Bugs (FIB) and saved him. Carl revealed that was his mission all along, by hacking the Queen he could figure out all the bugs' secrets and create a new species in order to fight against the bugs and bring humanity one step closer to ending the war. The Queen offered peace in exchange for Carl's life, but Hero refused and began fighting off the bugs. As they advance towards the Queen, Plasma Grenadier Bugs make short work of Carl's FIBs. Hero soon orders Carl to run and continue his research to end the war, as Carl is running through the corridors he is ambushed by a Warrior Bug but is rescued by Johnny in a Marauder suit. Carl and the remaining survivors successfully escape the John A. Warden before it was destroyed.

As they surveyed the wreckage of the John A. Warden, Carmen slapped Carl in the face, blaming him for getting her crew killed and nearly putting the Earth at risk for a Bug infestation. Apologizing for her loss, Carl calmly stated that in the long run, his research would save the entire galaxy, just like he saved her. Carmen then realized that it was he who telepathically guided her to rejoin Hero, to which he claimed is classified information. He then told his two friends that the three of them together are unstoppable, but Johnny coldly reminded him that he didn't involve them in his plans. Carl told Rico that he should lighten up, for he's a hero, to which his friends denied, before adding that he met one. Starship Troopers: Invasion

At a certain point, General Jenkins was aware of Sky Marshal Amy Snapp's scheme to utilize Q Bomb to destroy Mars along with Martian Independence movement in order to make an example to other colonies.

He tried to warn his old friend Captain Ibanez and asked her to go to Mars before he was leaving Luna Base. However, he was arrested by police under Sky Marshal Snapp's order, who tried to put him in court to execute him by scapegoating him for being responsible of Bug invasion on Mars.

He managed to sabotage Snapp's speech on the air, while helping Colonel Rico on Mars by using Dizzy Flores' image as his avatar to communicate with him, guiding him to the Terraforming Tower to defuse the Q Bomb.

After Snapp's scheme was failed, Jenkins not only resumed his position as a general, but also became a deputy Sky Marshal, restoring Rico's rank as a general. Starship Troopers: Traitor of Mars

Carl's personality has changed significantly throughout the series. What remains constant is his remarkable intelligence, his calculating wit and his loyalty to humanity and the Federation. During high school and immediately after graduation, Carl is a bright and ambitious young man and a loyal friend. As his career progresses and he rises through the ranks, his manner becomes much more secretive, scheming and somewhat callous. Though he maintains his friendship with Johnny Rico and Carmen Ibanez, his relationship with them becomes strained.

Carl in a propaganda film. 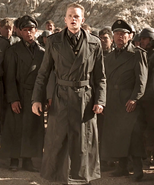 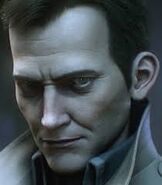 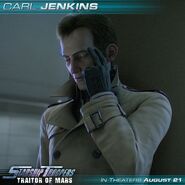