Blister Bugs (entomological classification: Coleoptera Meloidae) are a type of Arachnids. They are slightly larger than Warrior Bugs and similar in shape and colour to the closely related species of Blaster Bugs. Blisters have a huge gaping maw from which they can spew a powerful, corrosive green liquid which can be used to attack directly or dissolve walls and equipment. Though it is fairly short ranged, even Marauder armour can evaporate under its attacks.

The Blister Bug must first produce the bio-corrosive acid in its abdomen that it spits forth from its maw to ranges of 30 feet (about 9 meters), or more. The Blister is a four-legged bug, the rearmost pairs of legs are longer than the two front forelegs. The Blister's body is light brown with a shade of green, the bug has orange-coloured eyes with black pupils. It has three tan coloured crosswise stripes on top of the body, the legs are also tan with a shade of green, the abdomen is redish.

The upper mandible has three fangs, the lower mandible has two bigger fangs. Like the Warrior, the Blister Bug has two small claws. Blisters are not as fast as Warriors, but they can also climb. Unlike its cousin the Blaster Bug, Blister Bugs generally attack individually or in smaller swarms supported by Warrior Bugs, whereas Blaster Bugs attack in massed swarms for maximum effect.

The first encounter with the deadly Blister Bugs came during the Tophet Campaign.

There were further encounters with these Bugs in the Klendathu Campaign. One such specimen attacked a trench being held by the Roughnecks and in the engagement, trooper Richard LaCroix was badly wounded by the creatures acid attack. His Power Suit protected him from the bulk of the Blister Bugs attack, but his suits systems were damaged and the air inside had been poisoned which required an air purifier to save "Docs" life.[Episode needed] 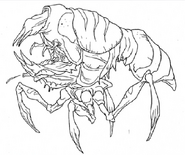 Design sheet of the Blister Bug

"Only a dead bug is a good bug!" Fatally hit Blister on planet Klendathu.

Blister Bugs attacking the structure of a landing platform on Tophet. 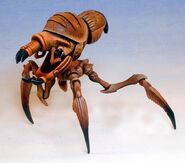 Blister Bug from the Roleplaying Game 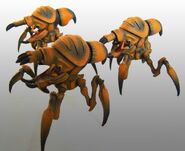 Add a photo to this gallery
Retrieved from "https://starshiptroopers.fandom.com/wiki/Blister_Bug?oldid=27787"
Community content is available under CC-BY-SA unless otherwise noted.