The name or term "Arachnid" should not be confused with Pseudo-Arachnid.

The Arachnids (more commonly known as Bugs, and Archies[1]) are a hostile alien species that have conquered many planets across the galaxy, creating an empire that is directly at odds with the human-dominated United Citizen Federation.

The Arachnids were originally believed to be mindless creatures, devoid of what made a being truly sentient. When Johnny Rico and Carmen Ibanez dissect Arkellian sand beetles, the biology teacher states that the Arachnids have millions of years of evolution behind them and are, in the case of survival capability, the perfect species. They have the ability to colonize planets "by hurling their spore into space" and possess a social structure which fits their mental capabilities perfectly.

As the Arachnid War progressed, it became clear that they have a caste system, with each subspecies filling a specific niche in Arachnid society. Brain Bugs and the God Bug have extreme psychic abilities that can be used to control all bugs in a given colony, and to communicate with their confederates across space.

Most types of Bug are, overall, less intelligent than an average human, save for those belonging to leadership castes such as the Brain Bug, Control Bug, God Bug, and the Queen.

As the United Citizen Federation expanded its territories across the Galaxy, it came into contact with the Arachnid Species, who had by that point created a vast empire of their own The Federation initially considered the Arachnids to be a less advanced civilization, below the notice of such higher beings as themselves. However, to avoid conflict, the region of space the Arachnids had colonized was Quarantined to prevent any human settlement within it. Despite this, unofficial colonies were created on Arachnid planets, often ending with the Arachnids discovering such installations and attacking them in force, wiping them out in short order. This fate was suffered by many an unwary colony, such as at Port Joe Smith, where the inhabitants were cut down to a man and left, bloody and torn, to adorn the empty streets like grotesque decorations.

When a meteor left the Arachnid Quarantine Zone and destroyed Buenos Aires, the Federation claimed that the Arachnids were responsible, and that this action was a clear and certain declaration of war. The following conflict would come to be known as the first Bug War, later followed by the Second Bug War.

The Arachnids are an alien species that has conquered and colonized many planets across the galaxy. The Arachnids are first discovered on Pluto which led to a large battle against SICON forces. After The Pluto Campaign it was discovered that the Arachnids were actually an interstellar race covering much of the galaxy. It is also known that they will not stop their war against the humans until they are all destroyed. 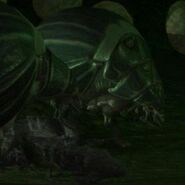 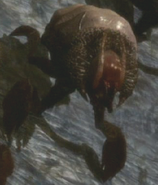 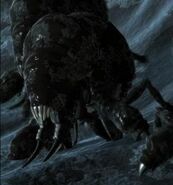